Submitted by Jon Monsen, Ph.D., PE || Valin Corporation
The basic gas control valve sizing equation can be found in ISA-75.01.01-2012, “Industrial-Process Control Valves, Part 2-1: Flow Capacity,” and in “IEC 60534-2-1 (Second Edition).” These standards show the valve sizing equation to take this form when arranged to be solved for “C”:

C is defined as being either Cv or Kv (calculated required valve capacity) depending on the value of N6. This equation requires a value for the upstream gas density where the symbol for density is p (rho). The equation assumes that the user knows an accurate density value. There are accurate tables for a few gases, the best example being steam, but such accurate information is not readily available for most industrial gases. The standards (the ISA and IEC standards are, for all practical purposes, identical) make allowance for this by including two additional equations.

These equations, one based on mass flow units (symbol W) and one on volumetric flow units at standard conditions (symbol Qs) substitute for the upstream density a calculation of density based on the ideal gas equation using the molecular weight of the gas, its upstream pressure, and upstream temperature. To correct for the fact that a gas density calculation using the ideal gas equation does not always duplicate actual behavior, the standards include the compressibility factor (symbol Z) to include the degree to which a particular gas does not follow ideal gas behavior.

The equation for mass flow is:

A method for determining the value to use for the compressibility factor is outside the scope of the standards.

Experience has shown that for most gases used in industrial processes, and at the pressures and temperatures that they are normally used, for valve sizing purposes, assuming a compressibility factor of 1.0 is usually (but not always) sufficient. There are equations of state that predict the real density of gases, with varying degrees of accuracy. Some of these are included with piping system analysis applications. These applications can be expensive, at least from my point of view.

In 1987, when I was developing Hammel-Dahl’s first control valve sizing application, I chose to use Van der Waals equation of state, though not as accurate as more complex equations, to account for the non-ideal behavior of gases. Advantages of using Van der Waals equation is that it is fairly simple and can be written in terms of the compressibility factor, and the reduced pressure and reduced temperature of the gas1:

It is significant to note that this is of the same form as the generalized compressibility chart, namely, Z = ƒ(Pr, Tr). An iterative solution is required.

Some time ago, I got tired of reading the charts, which requires some visual interpolation (and eye strain) and made a Microsoft Excel sheet where I tabulated many reduced pressure and reduced temperature points from the Nelson-Obert charts and included a two-dimensional interpolation scheme that yields a compressibility factor for most gases for which I can find the critical pressure and temperature. The use of this spreadsheet is the topic of this article. 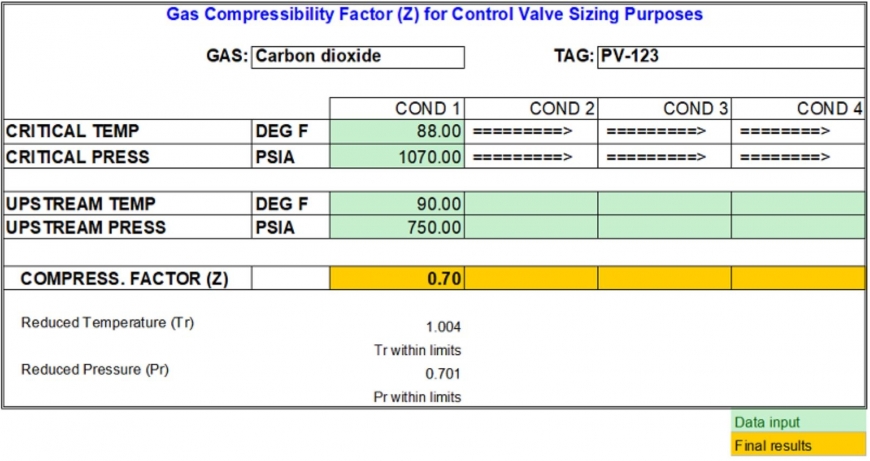 Figure 1. Calculation for carbon dioxide—process data for this application yields a compressibility factor of 0.70.

The worksheet can be downloaded at no charge here. 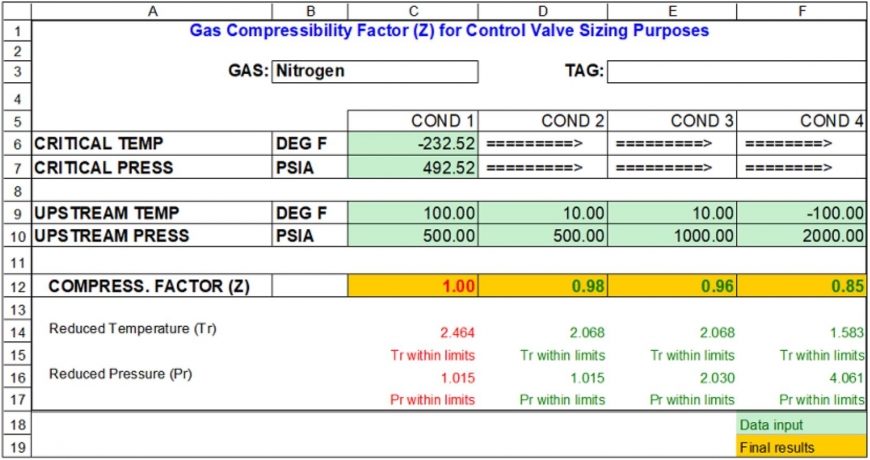 Create an Excel worksheet based on Screen 1 through Screen 5. In these images, color coding of worksheet entries is as follows: Table A. Formulas to be entered into the Excel sheet.

There are two tables in the worksheet: Table 1 in Screen 4. and Table 2 in Screen 5. Type in the numerical values as shown. Then name the tables by highlighting the data shown inside the red box, and from the Excel Formulas tab, select “Define name” and type in the name of the table (TABEL1 or TABLE2) and click OK.

The Nelson-Obert charts are said to have an accuracy within 1 to 2 percent for Z values greater than 0.6 and within 4 to 6 percent for Z values of 0.3 to 0.6. The generalized compressibility factor graphs may be considerably in error for strongly polar gases, with errors as great as 15 to 20 percent.

The quantum gases hydrogen, helium, and neon do not conform to the corresponding states behavior and the reduced pressure and temperature for those three gases should be redefined in the following manner to improve the accuracy of predicting their compressibility factors when using the generalized graphs:

The worksheet is valid for reduced pressures between 0.0 and 20 and for reduced temperatures between 1.0 and 15. The Nelson-Obert low pressure chart gives some data for reduced temperatures less than 1.0, but there is not enough data to lend it to the present method of tabulating data and interpolating between given data points. I think the reason for this scarcity of data is that the authors of the chart were not able to find much good agreement between various gases and their compressibility factors in the area between the reduced temperature (Tr) = 1.0 isotherm and the saturated vapor line.

How it all works

A brief explanation of how the worksheet works follows:

The user interface is in the upper left corner of the worksheet. You can optionally enter the name of the gas and the tag number of the valve for which you are doing calculations, for your reference, if you are going to either save or print out the worksheet.

Enter the critical temperature and critical pressure of the gas, and up to four upstream temperatures and pressures. The fields where the calculated compressibility factor(s) appear will remain blank until all required data has been entered. It is possible to use other units than PSIA and degrees F for either and/or both upstream and critical pressure and temperature. See the area just to the right of the user interface.

For your reference, below the data and results area, the reduced temperature (Tr) and reduced pressure (Pr) being used in the calculation are displayed along with a note stating whether Tr and Pr are within or outside the limits of the worksheet.

If you have entered temperatures or pressures that result in Tr or Pr that are outside the stated limits, the COMPRESS. FACTOR (Z) field will read #NA and the notes below that will state which parameter is out of limits.